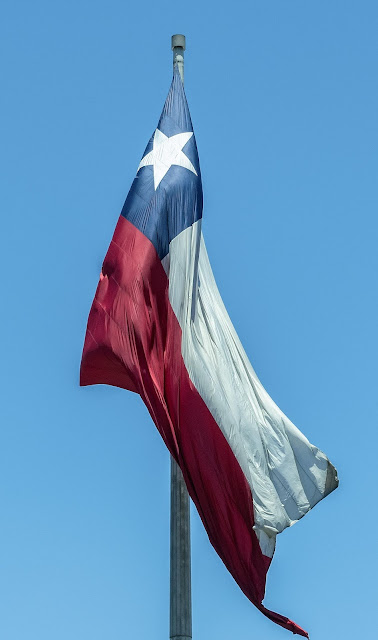 The voyage from Brazil with stops in the large and small ports of Uruguay, Argentina and Chile gave us a bucketful of rewarding experiences. We saw a lot and learned much about new places for us and the people who live there, their food and wine, and how they feel about their home countries, as well as their views of some of the larger world.

While we only scratched the surface of parts of South America, we now have more than a rudimentary knowledge of the geography of that fascinating continent, and we are also now more aware of the differences and the similarities between the people of the countries we visited and the people in our part of the world. We all share similar day to day pressures and concerns, be they political, environmental, economic, or family life. At the end of the day what was most gratifying for us was the friendliness of all the strangers we interacted with.

The peoples of the South American continent are as much, if not, more a mix of indigenous and varied ethnic origins as those who call North America home. Inequalities and tensions prevail above and below the equator, yet while we travel as tourists  - privileged and casual observers - the conditions of the haves and have-nots have not gone unseen and unfelt, but alas, further commentary on the human condition is beyond the scope of this simple travel blog.


Santiago, this great big land-locked city, is our last stop before flying home, and we are ready to do just that - get back to family, friends and our own bed. Oh yes, and to work. One of is is only partially retired.


What does one do on Day 23 & 24 in such a big city after where we have been and what we have seen? We take the HOHO, of course, aka the Hop On Hop Off bus. A perfect choice because this fare for a day really gave us an overview of the city, the independence, and the freedom to choose what we wanted to see given our two days here.

NOTE: this final posting is really just a mix of images that caught my eye in this rather complex city. Admittedly, we were a little tired, a little done, and I think Santiago did not capture a lot of our interest. Maybe also, we were kind of pampered on the ship, and now we were cut loose and cast adrift, as it were, fending more for ourselves, perhaps also biding our time until we were picked up and homebound. 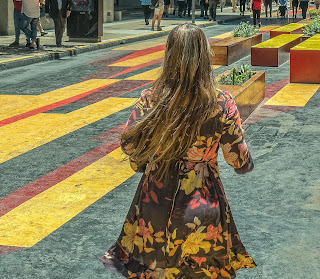 The photo above reminds me of the online security login where, in order to pass go, you have the click the I AM NOT A ROBOT box. If my picture is divided into squares you have to click in each square that has a cell phone. If I took the photo a few seconds later maybe there would be more squares to prove you not a robot: the guy on the scooter reaching for his device? The woman reaching into her bag for her smartphone? What about the guy leaning against the tree talking on his phone? 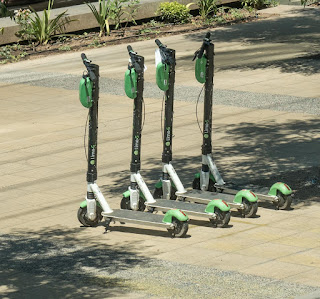 That scooter you just saw is an electric rental. There are lots of these around the city. How cool is that?

The tramway - teleférico - took us above the city for some terrific aerial views, then we rode the funicular down to the other end of town.


Am I being unfair, poking fun? After all, at least it was English.


OLD CITY NEW CITY
SANTIAGO HAS IT ALL

Descending back down to the city on the funicular, one arrives at the old Bellavista neighbourhood. Why is there always so much more colour in the older, poor areas of the cities? Remember Buenos Aires, posting #3?

It was so wonderful making new friends
on the ship. Alastair and Helen from
New Zealand, we have been missing our fun times together.

In closing, for readers who were looking for information about going on a cruise, who were doing some online research about the pros and cons of cruising, or who wanted to find out about whether they should spend the big bucks and buy tickets for an Oceania cruise, oops, that's not what this blog was about. My blog was not a sales pitch for cruising or for a cruise line. Aah, if only you'd known about that before you got you this far. If you are reading this line, then I must have had you hooked. Thanks for hanging in there.

Argh! Argh! Argh!
Like a three-eyed sailor:
Aye, Aye, Aye.
Aye, I prepared for the trip,
Aye, I sailed the ship,
Aye, I came to shore and lowered the sail.
Aye, my eye and I trust you enjoyed the tale.
Argh! Argh! Argh!

You can go now.

Gary Karlsen
Gary Karlsen’s rich and varied travels have included circumnavigating North America by thumb, riding the rails across Canada, flying single engine airplanes into mountain lakes, traveling more than half the globe as a merchant mariner, and speaking at international conferences as an educator. He has had careers in the construction industry, the teaching profession, and as a television producer. Karlsen continues to travel and explore the world with his lifelong companion, Joanne, sharing it with others through his writing, his photography, travel blogs and videos. He lives with his wife in British Columbia, Canada. For information about his recent publication, No Ordinary Seaman – A Memoir see his writing and photography at www.noordinaryseaman.com

This is Los Lagos region - the Lake District of Chile, on the edge of the Patagonian wilderness. We are now just over a thousand kilometres south of Santiago, our final destination.

The Osorno  is one of  twelve active volcanoes in the region. It dominates the landscape from a very long way off.


Lake Llanquihue is the largest lake in Chile 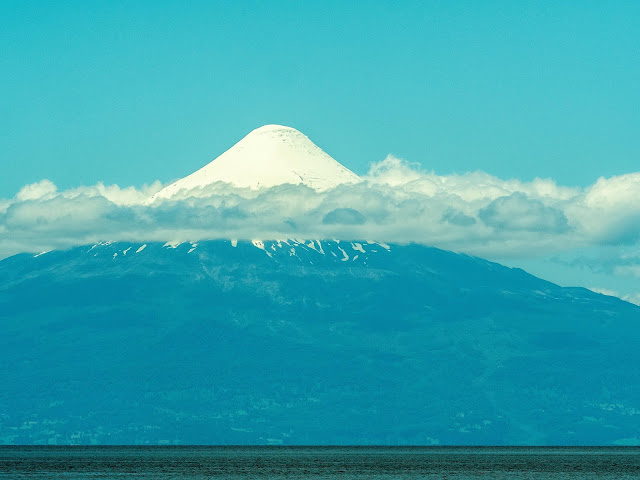 We did a half day excursion on a nice small bus with about a dozen fellow fun passengers, guided by a local young Chilean woman.

Maria's English was terrific. She was just completing (on scholarships) her Masters Degree in Linguistics  and will be starting her doctoral programme in Germany in the fall. 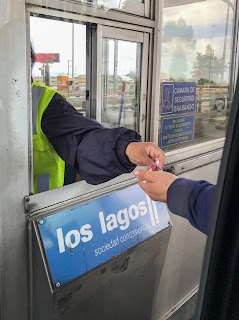 We pre-booked online with ViaTour for about one fourth the price of the Marina's excursion.

Our tour was like a Sunday outing with some new friends.

Lunch was a picnic.
more on that below 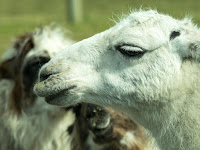 In the mid-1800s Chile's President Manuel Montt opened up this remote, heavily forested region of the country with immigration and resource development, bringing in a wave of German settlers. Their influence remains today. Following the cleanup of a  cataclysmic earthquake in 1960 Chileans from around the country began to relocate here. 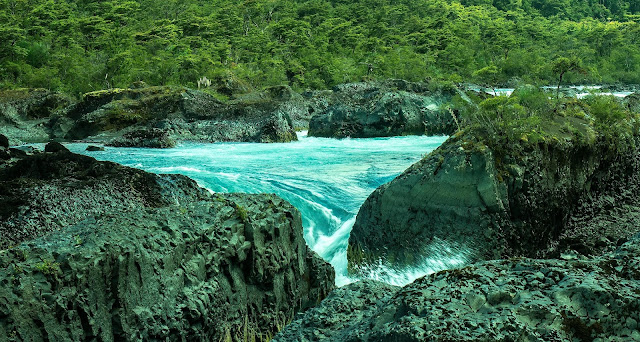 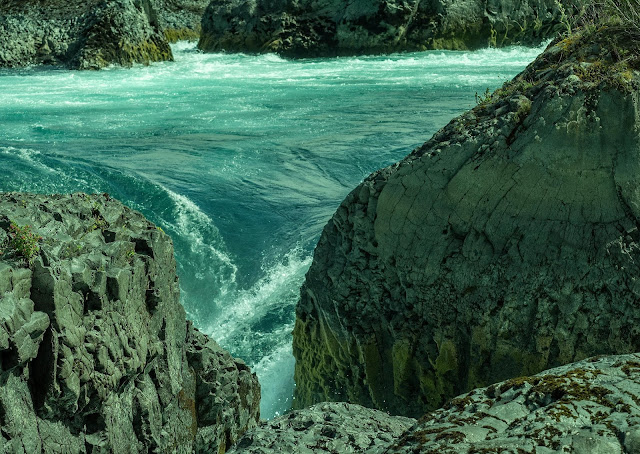 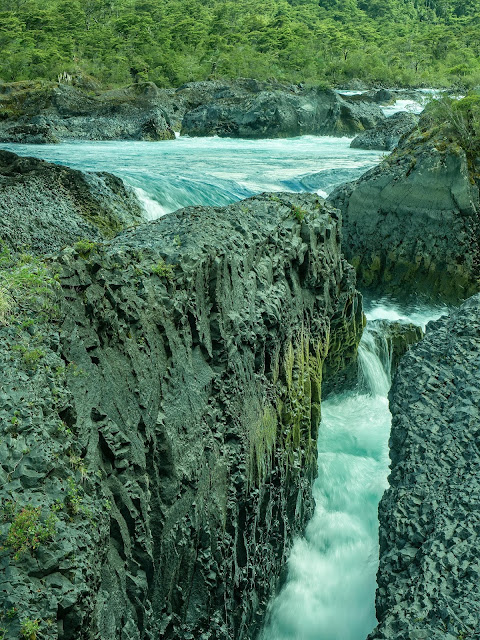 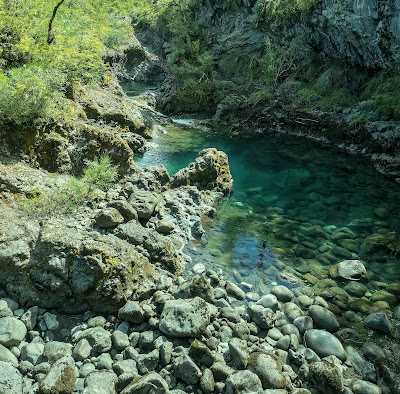 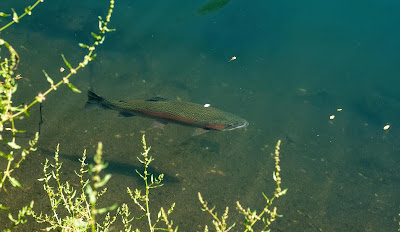 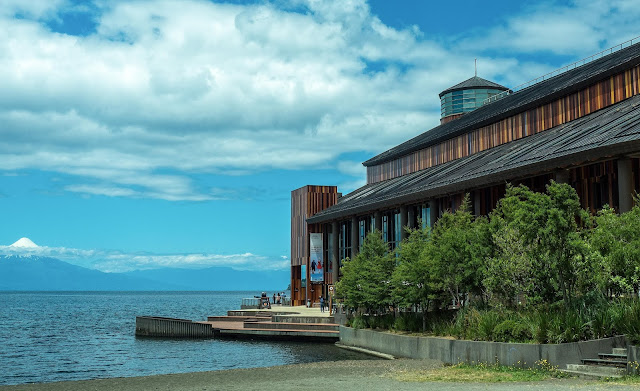 Frutillar was settled by German colonialists; the teutonic flavour of the town was reported to be rather Bavarian. We did not see anyone walking around wearing lederhosen and grey wool sweaters with pewter buttons, but there was some decidedly Deutsch architecture. Having been to the fatherland many times I left the photos of der buildinks for other tourists. 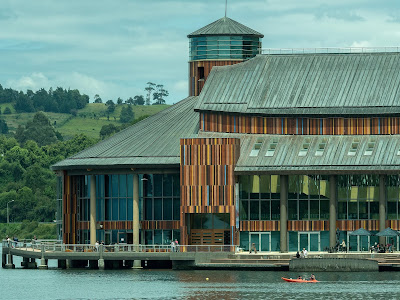 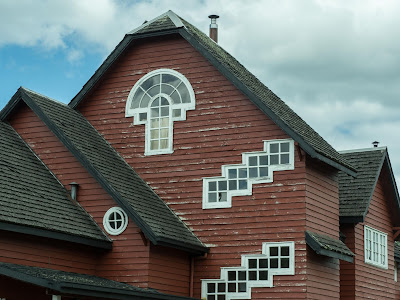 On the bottom floor of this old wood frame building there is a delicatessen that keeps some of the German food culture alive. We chose to forgo the  Würstchen, Sauerkraut, the Kuchen and the Strudel for the empanadas that were waiting at our next stop. 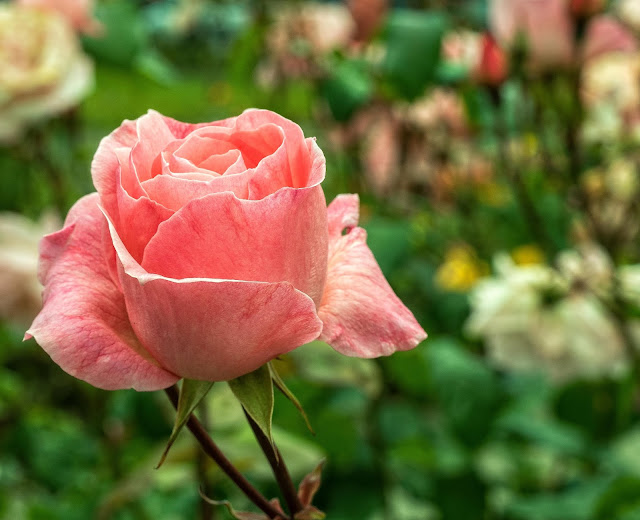 Puerto Varas, on the shore of Lake Llanquihue, is known as the Rose Capital of Los Lagos. The temperate climate, abundance of rainfall, and fertile land supports important  agricultural industries in this region. 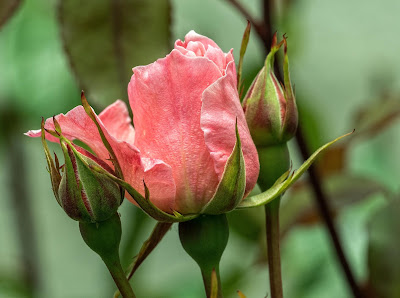 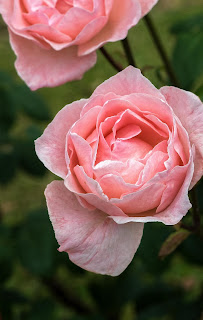 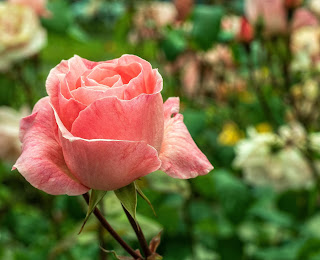 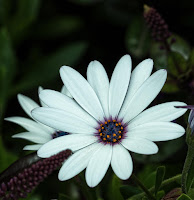 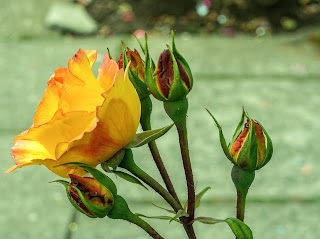 While the city rose gardens were near the end of their bloom, they were still stunning and I managed to preserve some of them in photographs. 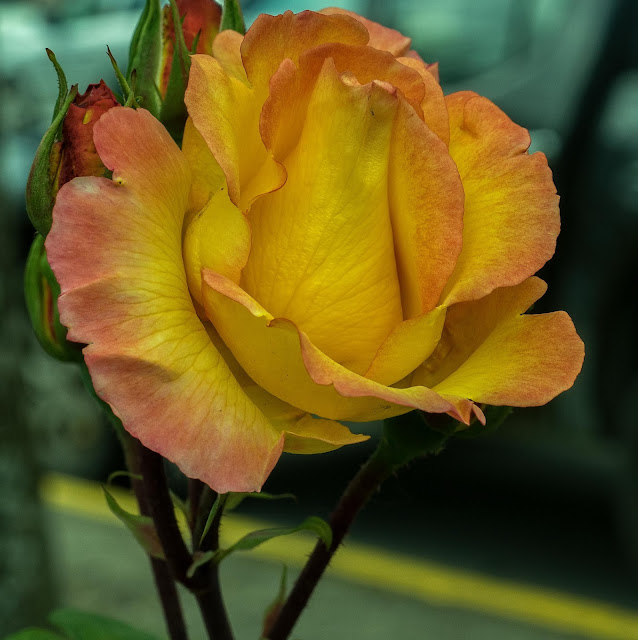 Our picnic of empanadas and wine was waiting for us.  Our small group feasted at the lakeshore amongst the wildflowers. It was T-shirt weather. 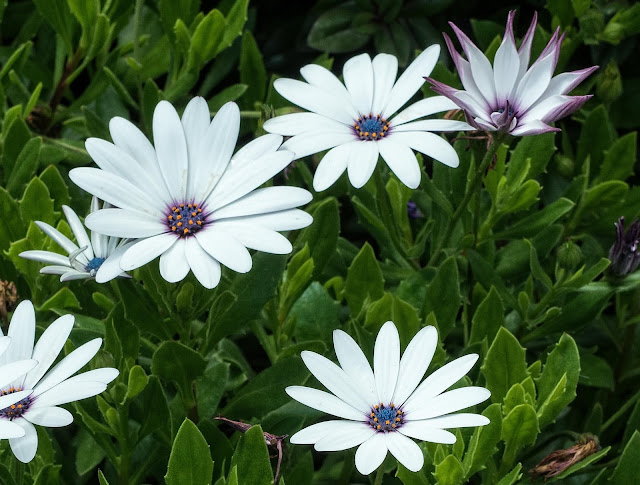 This Cabernet Sauvignon is also available at home with a different label - great picnic  and everyday table wine. Of course, the price is much higher in BC. Concha Y Toro is a big wine producer in Spain. One of the Iberian sons took the family label to the new world and made a success of it in Chile. 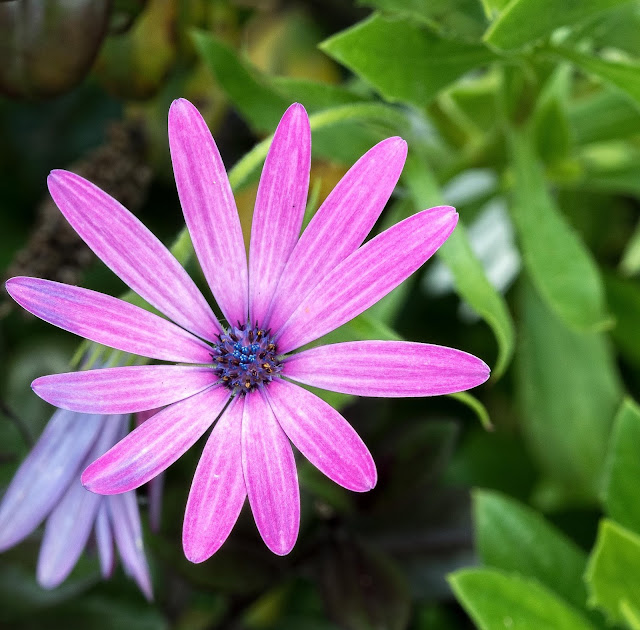 On our return to the ship, Maria dropped just the two of us off a few blocks from the dock so we could buy some of the same CabSav at a local corner store. Not a place for tourists. All the better. We bought the litre and a half for our cabin for just a few dollars: what the locals pay.

I was having fun in the small tienda (store), standing room only amongst the local favela residents, and I wanted to linger, to shop for some more wine, engage the locals by stretching my few words of Spanish,  performing some appropriate body language, and miming an assortment of facial expressions but my partner dragged me out of there, worried that we might miss our sailing, or worse ...


Safe and sound, we were back on the mother ship
in time for my daily cappuccino
made by Adib, our Barista extraordinaire!

Then, I seem to recall opening the vino tinto ...

Posted by Gary Karlsen at 1:00 PM No comments:

Gary Karlsen
Gary Karlsen’s rich and varied travels have included circumnavigating North America by thumb, riding the rails across Canada, flying single engine airplanes into mountain lakes, traveling more than half the globe as a merchant mariner, and speaking at international conferences as an educator. He has had careers in the construction industry, the teaching profession, and as a television producer. Karlsen continues to travel and explore the world with his lifelong companion, Joanne, sharing it with others through his writing, his photography, travel blogs and videos. He lives with his wife in British Columbia, Canada. For information about his recent publication, No Ordinary Seaman – A Memoir see his writing and photography at www.noordinaryseaman.com
Older Posts Home
Subscribe to: Posts (Atom)